Many years ago while playing Parcheesi at “The Home for the Visually Offensive,” several semi-intellectual Clearwater businessmen had a sudden urge for the smell of rough sawn lumber and/or the taste of Buffalo-style chicken wings.

Knowing full well that they could not agree on anything as a group, and that they could not get a weekend pass from the “home” to go to Buffalo, they decided to embark upon a major undertaking, that being, to open a place in Clearwater where other people of their caliber could gather and quench their thirst for the finer things in life.

Their venture, however, got off to a slow start. After announcing their plans, the “Hooters Six,” as they are now called, were promptly arrested for impersonating restaurateurs. There were no indictments, but the stigma lingers on. 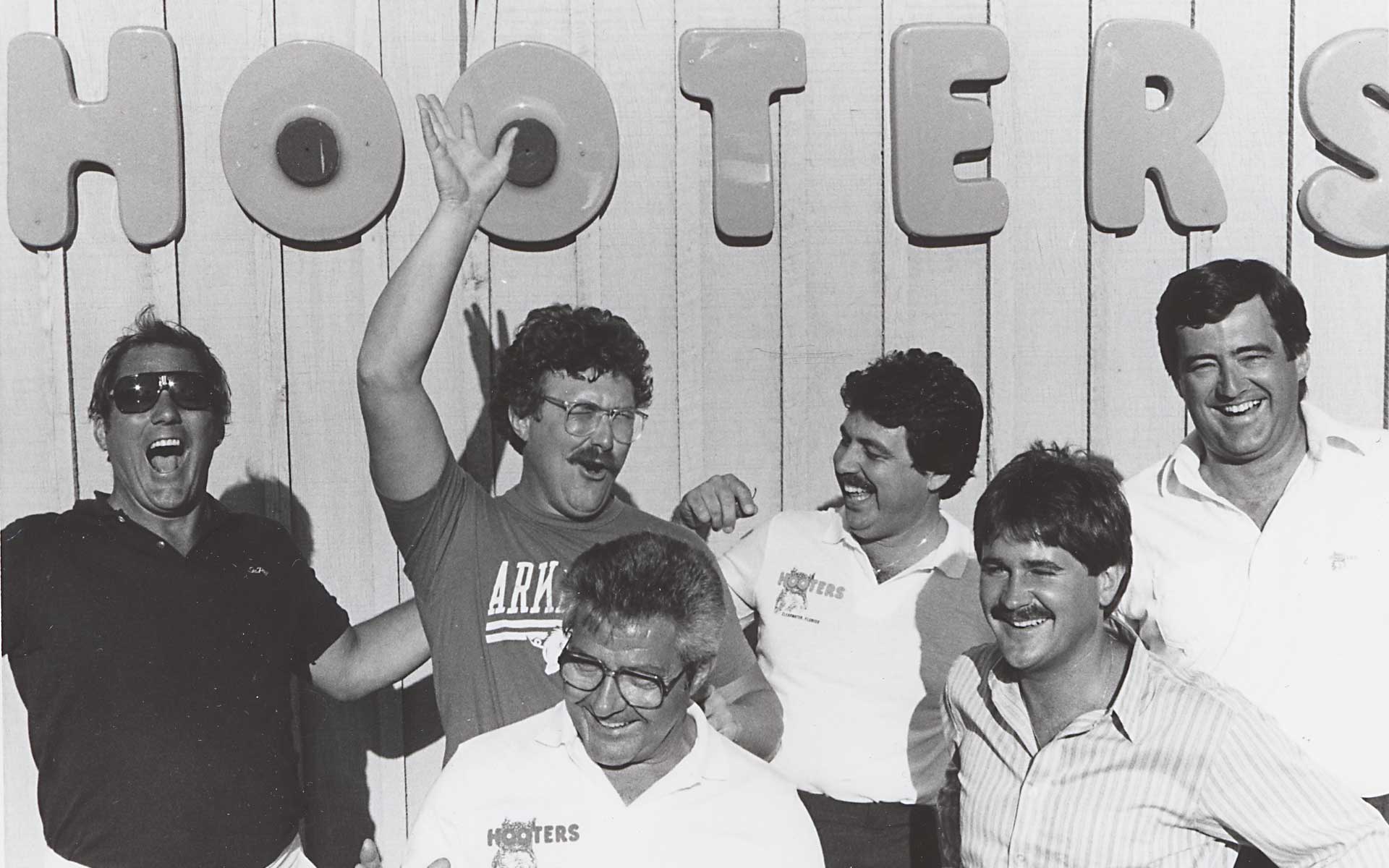 There were many obstacles ahead, not the least of which was procuring a suitable location. After months of negotiations and a heated bidding war with “Wells Brothers Disposal,” who wanted to use the building for a giant walk-in dumpster, terms were agreed to and 2800 Gulf-To-Bay Boulevard, Clearwater, Florida was theirs. Now the dilemma…

What to name the place. Simple – what else brings a gleam to men’s eyes everywhere besides beer and chicken wings and an occasional winning football season? Hence, the name: Hooters. It is supposed they were into owls. Strange group. Anyway, the end result is what you see around you. So sit back, relax, and if there is anything you require – within reason, of course – please ask. 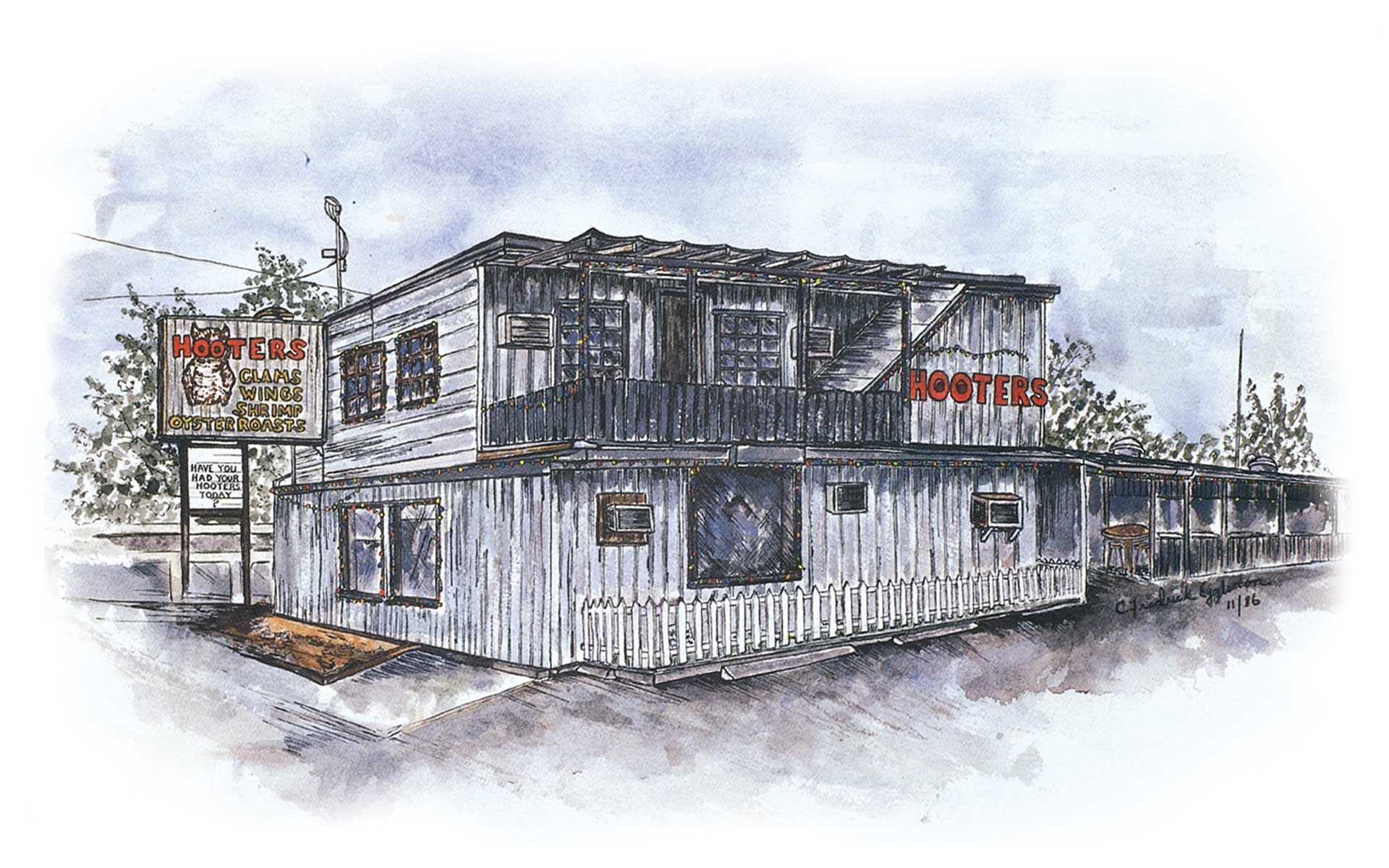 Hooters Through the Years

Hooters was appropriately incorporated on April Fool’s Day, 1983, when six businessmen with absolutely no previous restaurant experience got together and decided to open a place they couldn’t get kicked out of. Soon after, on October 4th of that year, the doors to the first Hooters Restaurant opened in Clearwater, Florida. 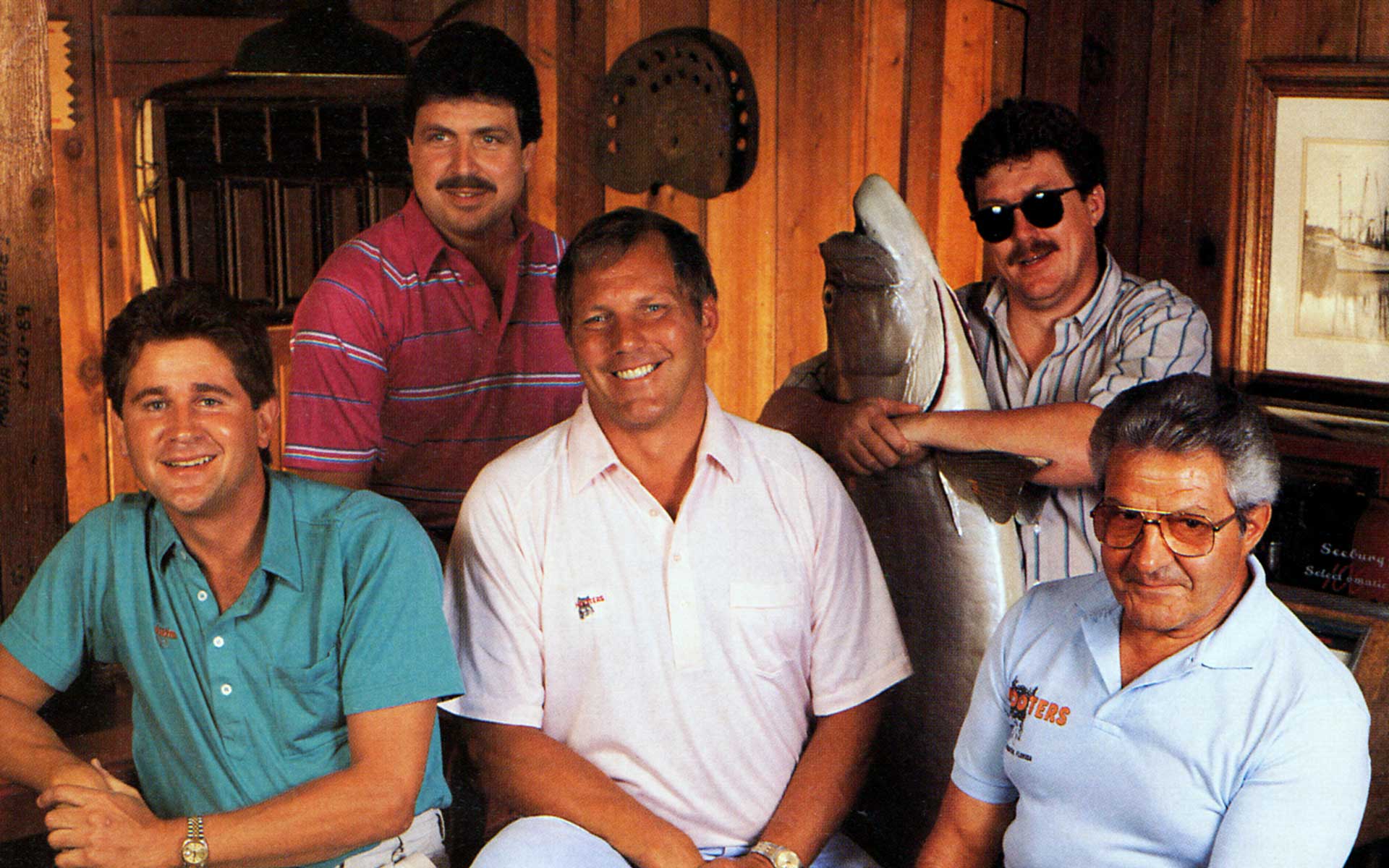 By late ’84, with Uncle Billy dealing with two hour waits to get in the door, the Hooters Six met and struck a deal with a likeable nut, Hugh Connerty, who wanted to take the restaurant worldwide.

Neighborhood Restaurants (which later became Hooters of America) embarked on a bold development campaign under Hooters, Inc.’s trademark and oversight. The concept grew from Clearwater to Tampa to Atlanta. Then came Bob Brooks, founder and owner of a company in Atlanta called Eastern Foods, which supplied food products to restaurants and grocery outlets. A few years later, Brooks would take over from Connerty and build the company into an international concern. 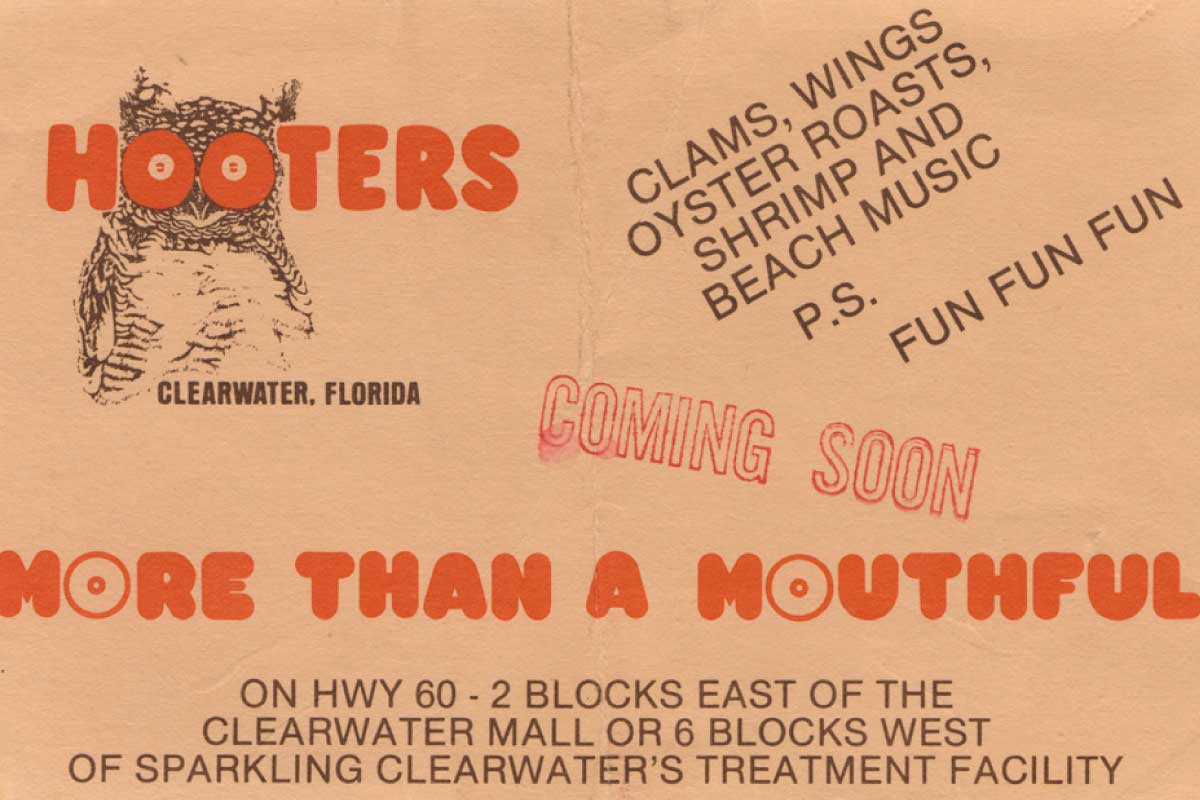 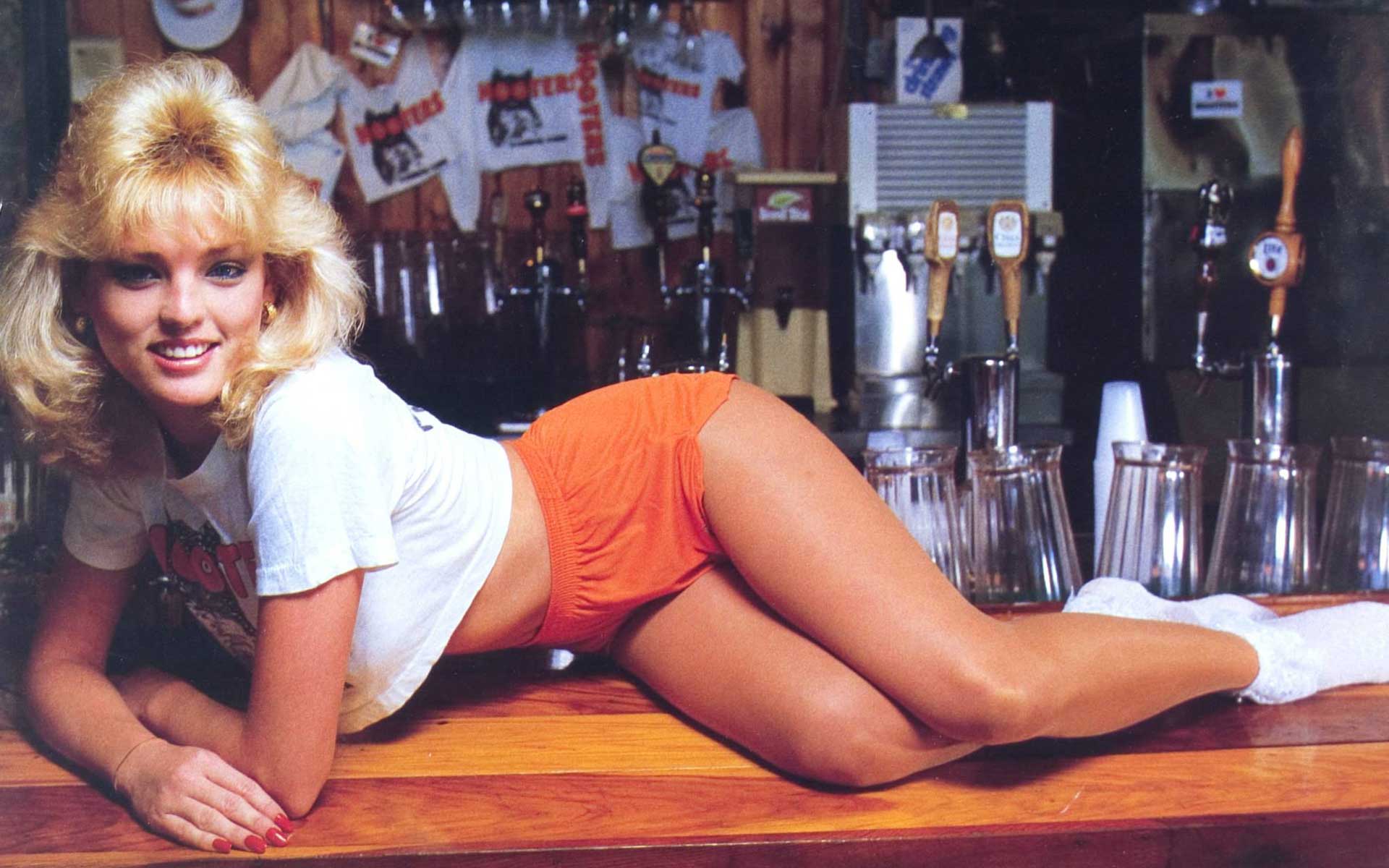 The very first Hooters Calendar launched in 1986, featuring the one and only Lynne Austin.

In 1985, the first Hooters Calendar (1986 edition) debuted with its soon-to-be-famous feature girl, Lynne Austin. After noticing the magnetic appeal of the very photogenic L.A. (Va, Va, Va, Zoom!), Droste submitted her photo to PLAYBOY magazine, hoping to get exposure for the restaurant.

The magazine wrote back, “Who’s the beautiful girl?” Then came the exposure. Lynne, along with a story of Hooters, made her debut in the Centerfold of the July PLAYBOY in ’86, going on to become one of the most popular Playmates ever, with her video becoming one of the best sellers of all time. Sales of VCR’s skyrocketed. (Okay, we made that last part up.) 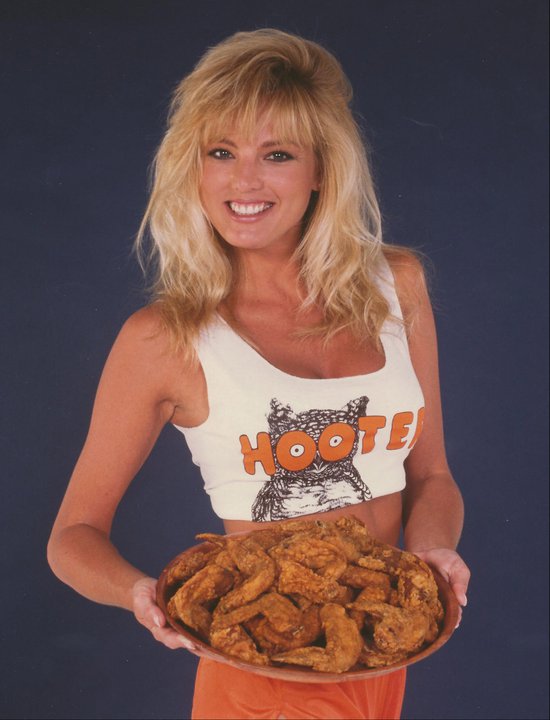 It’s early ’87. Do you know where your Hooters are? A local television program director approached the Hooters Six with another revolutionary idea: Why not feature the Hooters Girls on late night T.V., introducing and hosting the late movie? Debuting as “Hooters Nite Owl Theater,” starring Lynne Austin, the show soon ranked #1 in its time slot. Fan mail poured in by the thousands… okay, dozens.

The show was syndicated in 13 major markets nationwide, was renamed “Hooters Movie of the Weak,” and rapidly became a favorite with viewers for its Saturday Night Live-style comedy sketches and political skewers and began to beat out all the competition in its new afternoon time slot – including baseball! The show went off the air in 1995, victim of a legal skirmish between Hooters of America and Hooters, Inc., which would see the Hooters Six sending L.D. Stewart to HOA for future unnamed draft picks. 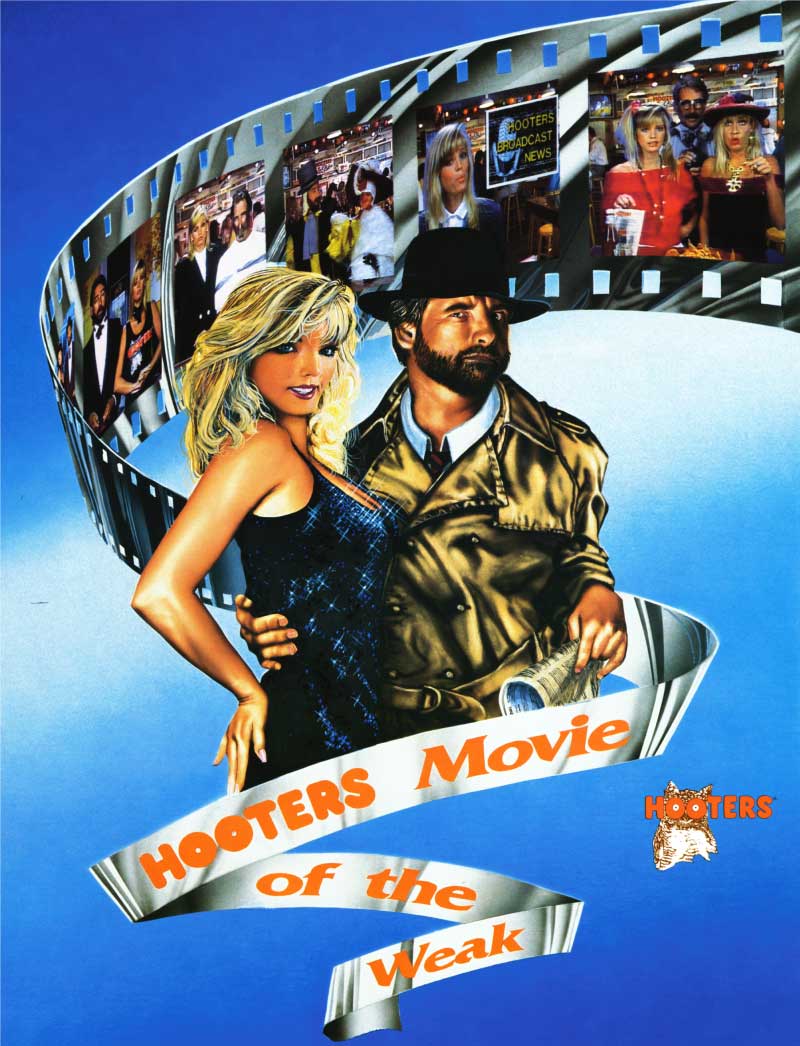 In the growing Hooters tradition of seizing opportunities, HOA President, Bob Brooks, spotted the un-sponsored up-and-coming owner/driver Alan Kulwicki. The two cut a deal for the last NASCAR race of 1991 in Atlanta. That great exposure blossomed into a full sponsorship the following year, which resulted in the little underdog nicknamed “Mighty Mouse” winning the prestigious Winston Cup at the Hooters 500 on the very track where it all started. His reverse victory lap became a signature. 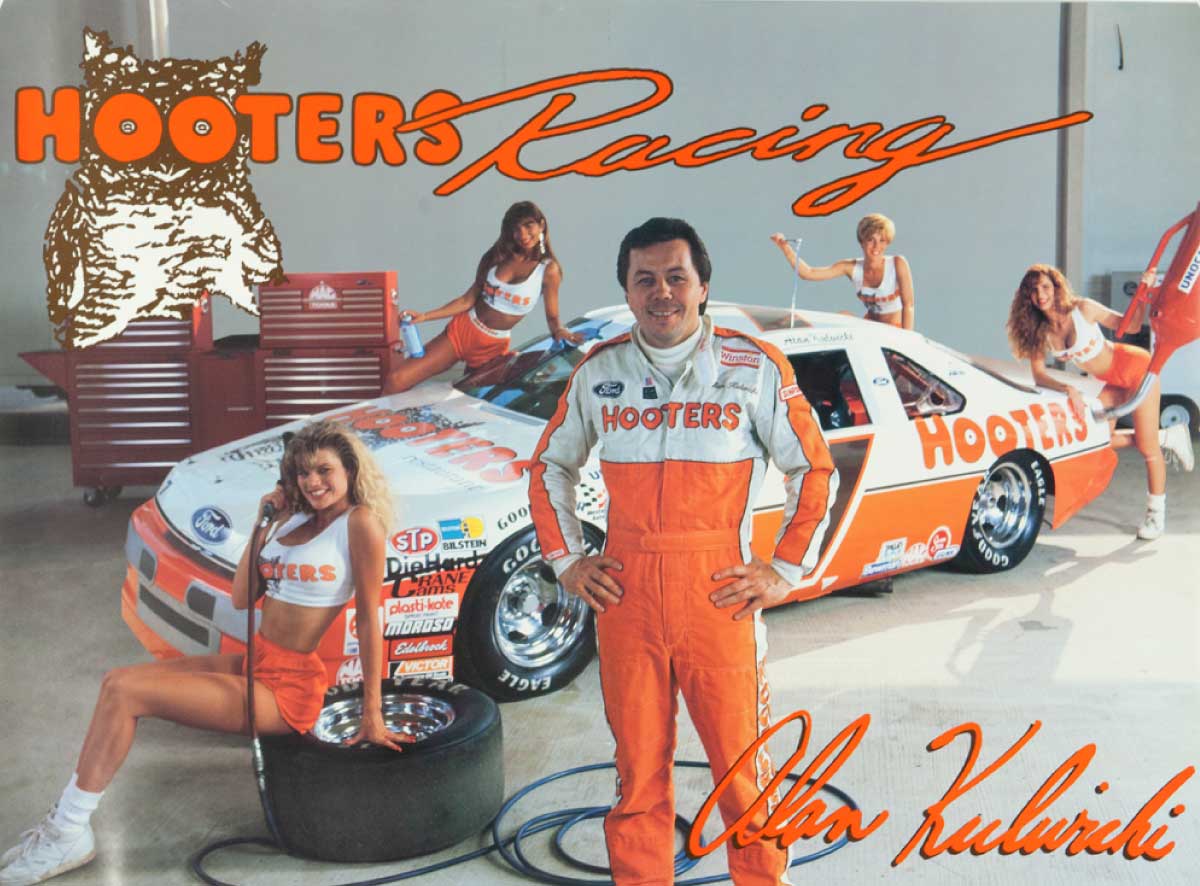 On April 1, 1993 – ten years to the day of Hooters first incorporation – tragedy struck. While on a promotional trip carrying the Hooters colors, fan-favorite Kulwicki, along with Mark Brooks, Dan Duncan and Charlie Campbell, all perished when their plane crashed outside of Bristol, Tennessee. The system mourned its champions but came back with greater resolve to honor their memory.

In 1995, Hooters of America Chairman Robert Brooks, who lost his son Mark in the crash, decided to jump into late model, short track racing and established the USA Hooters Cup Racing Series. Today, the USAR Hooters Cup Series is the premier short track series, which includes 24 events that culminates with the Robert H. Brooks Memorial Hooters 300 at the USA Speedway in Lakeland. 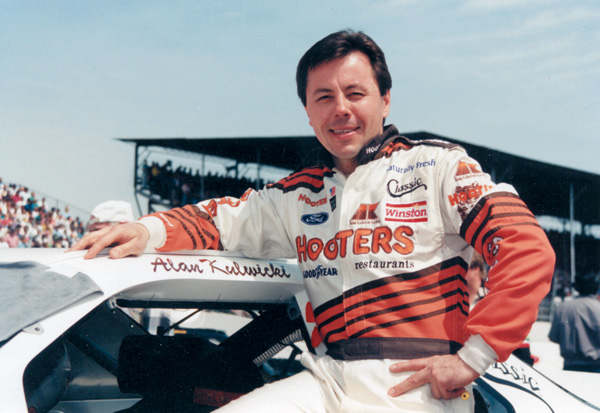 Soliciting grassroots support from customers and supporters, the gang took the first Vince “The Hooters Guy”“Hooters Guy” (a virile and scruffy Hooters manager by the name of Vince Gigliotti) and hundreds of thousands of written protests to Washington to protest the EEOC’s investigation and findings.

In a fluke of circumstance, the timing coincided with the government shutdown on November 15th, 1995. Hooters’ plight was the top media story of the moment. Representatives took the floor of Congress on Hooters’ behalf. The world responded, and finally, so did the EEOC. The future of the Hooters Girl was secured. 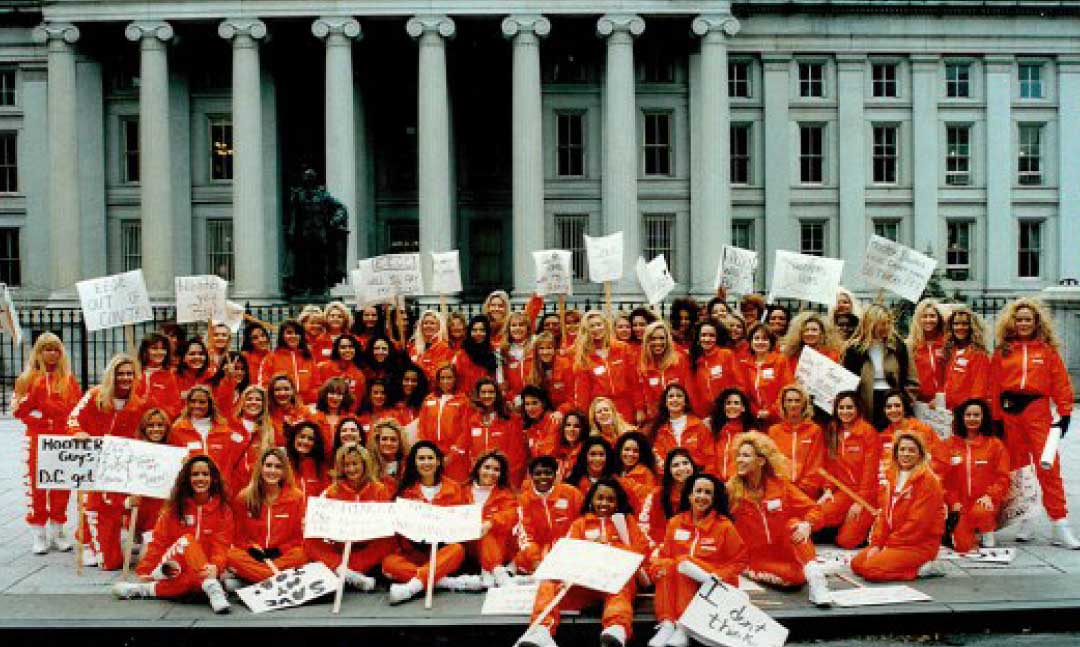 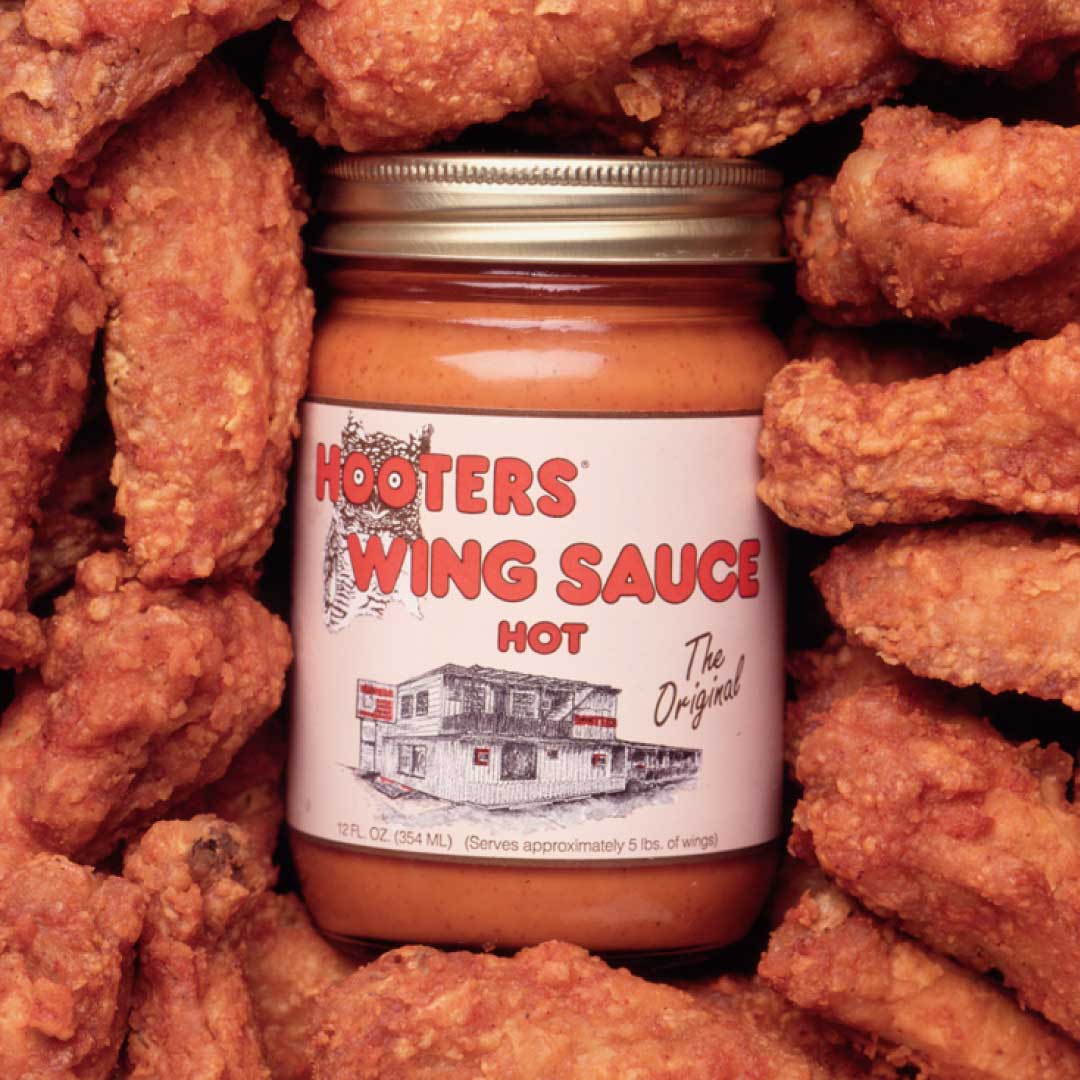 As Hooters’ menu expanded, so did its fame. By 1997 the system boasted customers from all age groups and all walks of life. They are all folks who have found “a cure for the common restaurant.” Cures are even available in major grocery stores across the country with the emergence of Hooters Foods Wing Sauce, Breading, & Hot Sauce.

Hooters has sponsored a jet car, shovel racing, and its own Arena Football team that everyone loved to beat. Then came the racing tour, pro golf tour, a radio show, a college bowl game – and we haven’t even gotten to the next century yet! 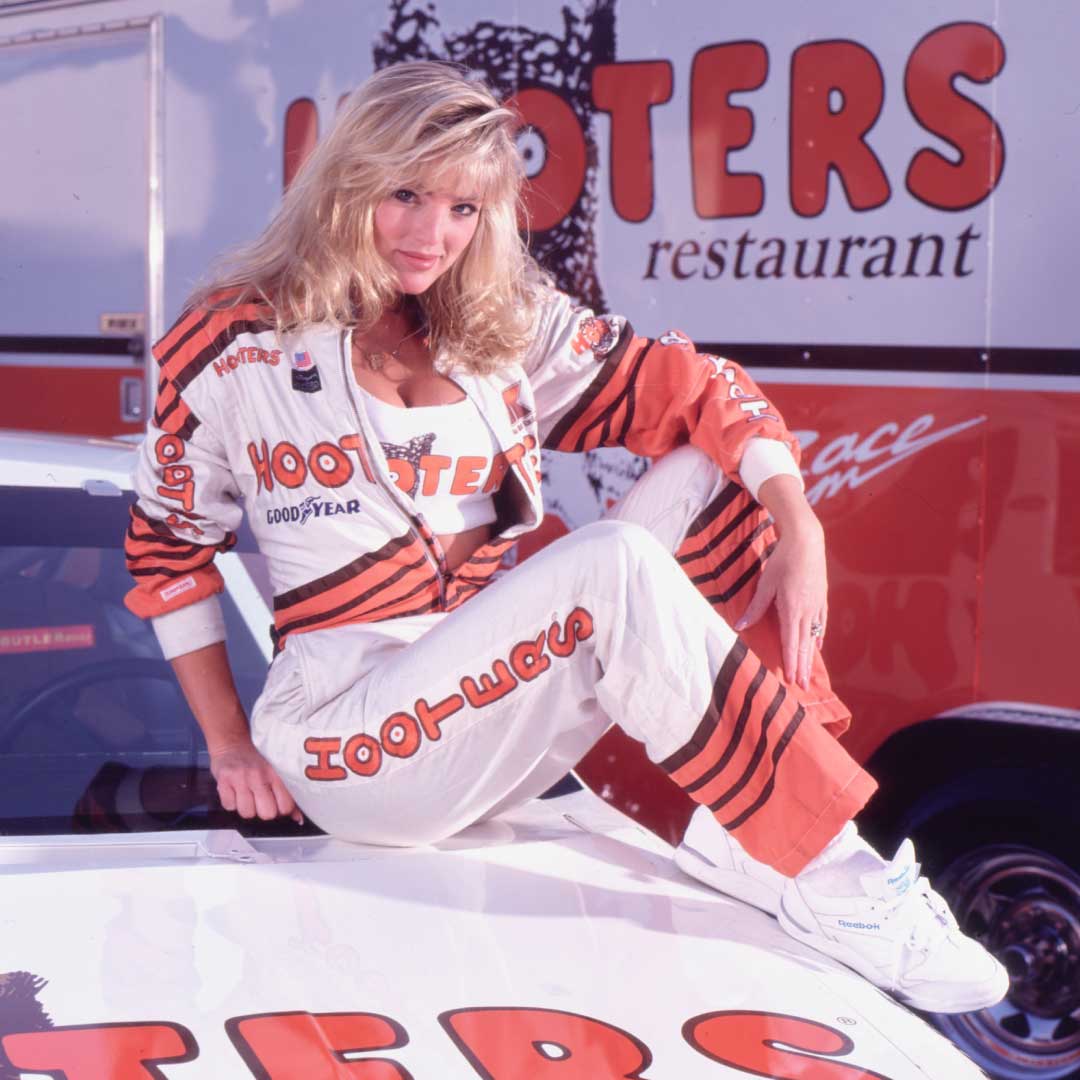 During 2002, a cause close to our hearts came to the attention of the entire system, when longtime Hooters Girl, Calendar model/centerfold, and Hooters manager, Kelly Jo Dowd, was diagnosed with breast cancer. We continue to fight the good fight alongside Kelly Jo, donating money, time, and effort toward eradicating this dreaded disease, and, at the 2006 10th Annual Miss Hooters International Swimsuit Pageant, HOA presented Kelly Jo and her family with a check, pledging a million dollar grant toward research at the “V” foundation.

Kelly Jo’s daughter, Dakoda Dowd, a young golfing phenomenon, made headlines in 2006 when, as a 13 year old, she qualified for, and played in, the LPGA tournament in order to fulfill her mother’s wish to see her play in a professional golf tournament. 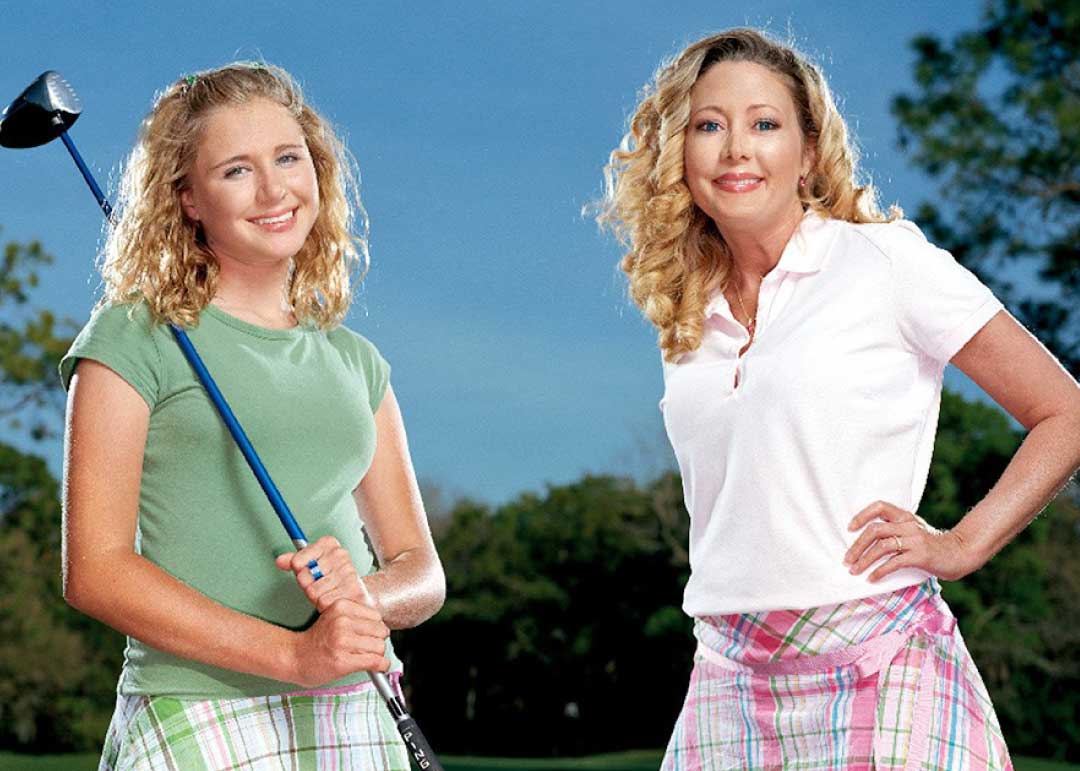 Hooters took to the sky when Hooters Air marked its inaugural flight on March 6, 2003.

In May of 2003, Hooters hit the road with the Operation: Let Freedom Wing Tour, hosted by Armed Forces Entertainment, to entertain the troops in the ‘stans; Kyrgyzstan, Uzbekistan, Afghanistan, Pakistan, and Qatar. Hey, what’s that Qatar doing in here? Hooters Calendar Girls and UC3, a popular Hooters-sponsored singing girls’ group from the Tampa Bay area of Florida, flew with several HOA top guns and endured temperatures exceeding 112 degrees during their 16 day stay. The tour featured a 90 minute variety show packed with music and humor.

The show ended with a bang when UC3 sang “Anywhere USA” accompanied by 6 flag waving Hooters Calendar Girls sporting Hooters latest Military appreciation uniform, featuring camouflage patterned shorts and a tank top with the line “Weapons of Mass Distraction” on the back. The show, which was designed to resemble the classic Bob Hope USO tours, was described by many troops as the most fun and best attended morale show in years.

During the tour, the Hooters Group distributed 2,000 Calendars; 20,000 Let Freedom Wing Lapel Pins; 10,000 posters and 10,000 decks of special Hooters Calendar playing cards featuring 2 special “Jokers” Osama Bin Laden and Saddam Hussein. The 7 shows were attended by over 15,000 troops and UC3 and the 6 Calendar Girls figure they signed over 100,000 autographs on the special tour merchandise. 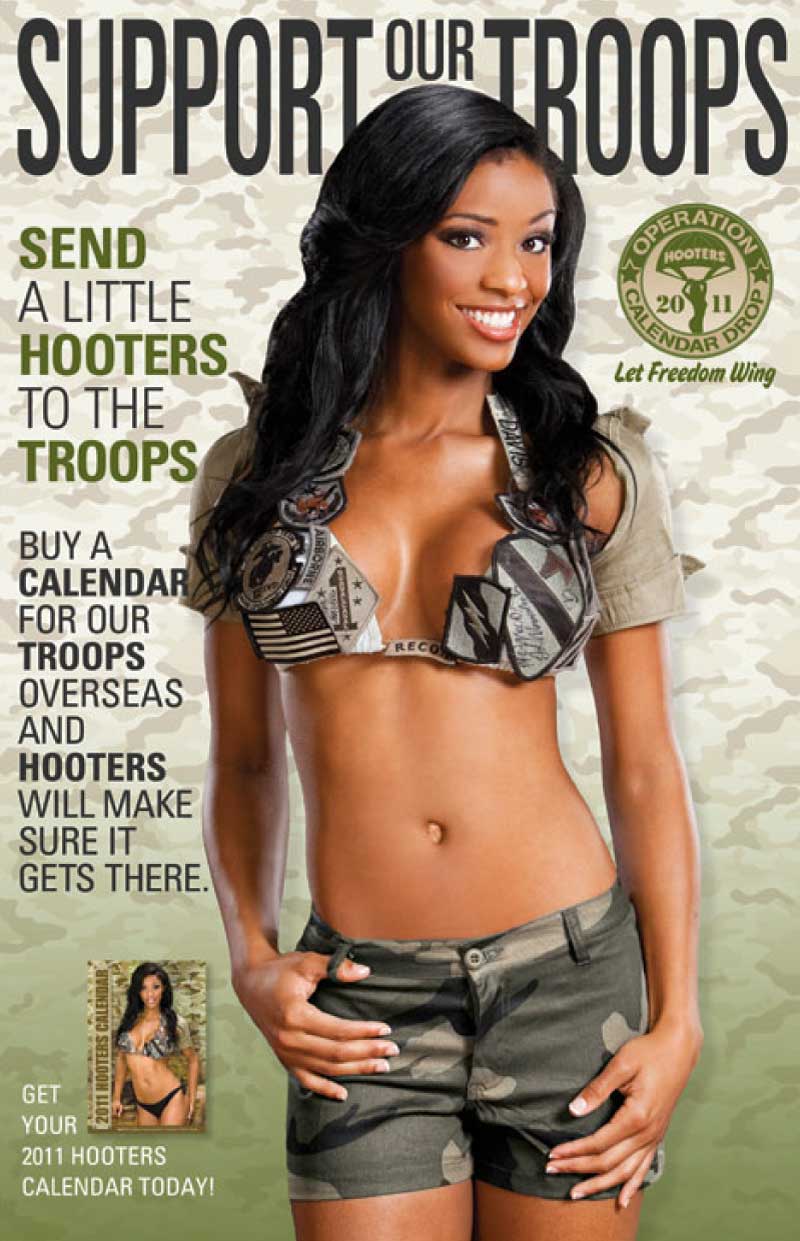 Viva Las Hooters! Always ones to gamble on a good time, the Hooters Six retained the rights to open a casino in Las Vegas. If you haven’t been to Hooters Casino Hotel, just off the strip on Tropicana, then you haven’t been to Vegas, baby. This casual, fun alternative to the giants on the strip, HCH brings a whole new unfussy element to Sin City, and compared to some, a little decorum, too. What?!? Decorum at Hooters? You check us out! You’ll soon see why we call ourselves, “The Cure for the Common Casino.” For you NASCAR fans, you’ll have to make a stop, because Hooters Casino Hotel is the proud owner of the actual car that Alan Kulwicki raced in the ’92 Winston Cup race to become champion. Don’t miss it!

On July 15, 2006, HOA Chairman of the Board and Worldwide Wing Commander, Bob Brooks, passed away after a pair of decades “makin’ people happy” with Hooters. His able son, Cody, grabbed the baton (but not in the “twirling” sense) and quickly earned the respect of the collective Hooters system, accelerating expansion across the globe and re-instilling the commitment to quality and to charitable involvement from neighborhoods to nations. 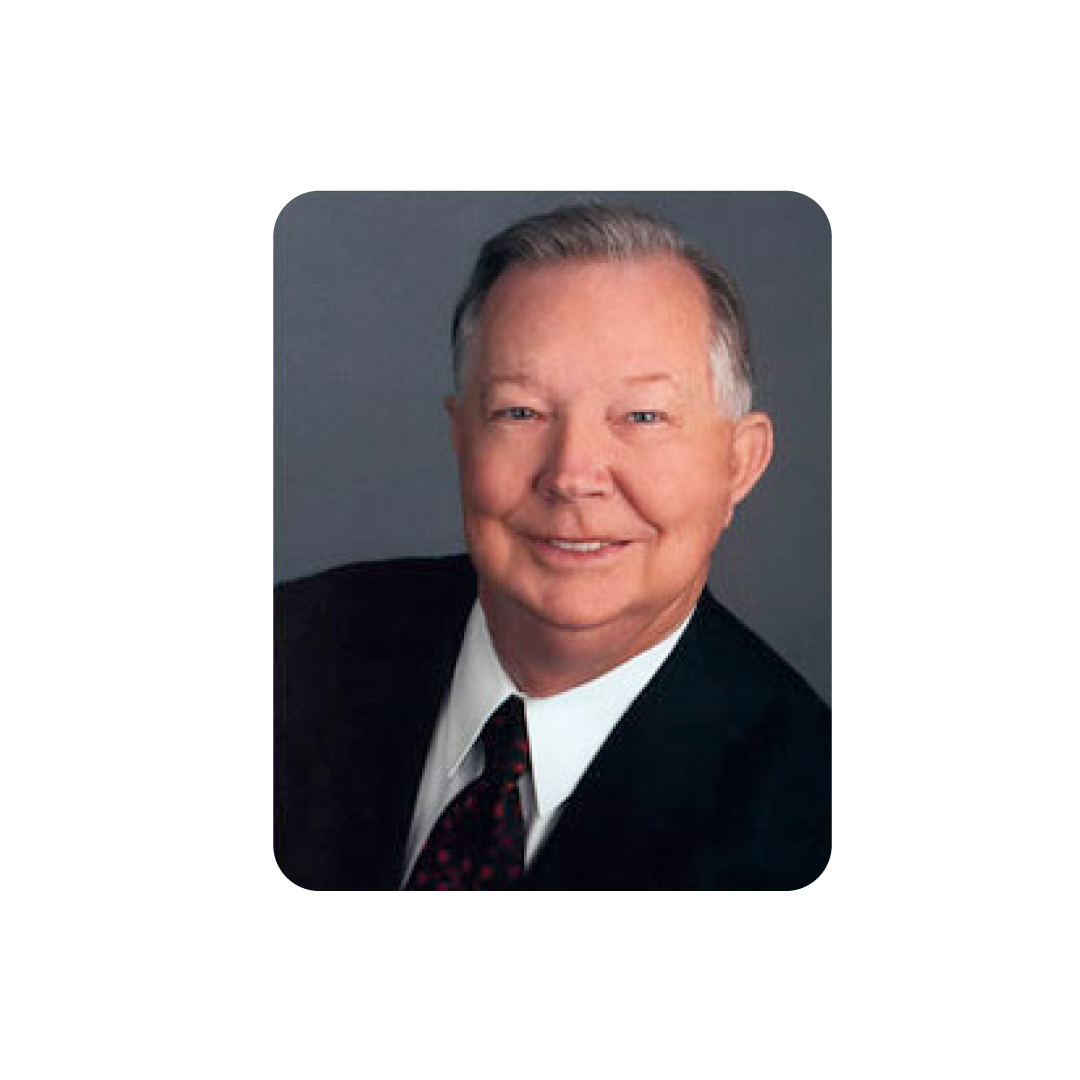 And they said we would never last! 35 years later and we are still wingin’ it. Not many brands hit this kind of milestone, but by the grace of the orange shorts and World Famous Chicken Wings, here we are. We have always prided ourselves on engraining ourselves in the communities in which we do business, and those communities have returned the favor. They have kept us thriving for over three decades. Now here’s to many more! 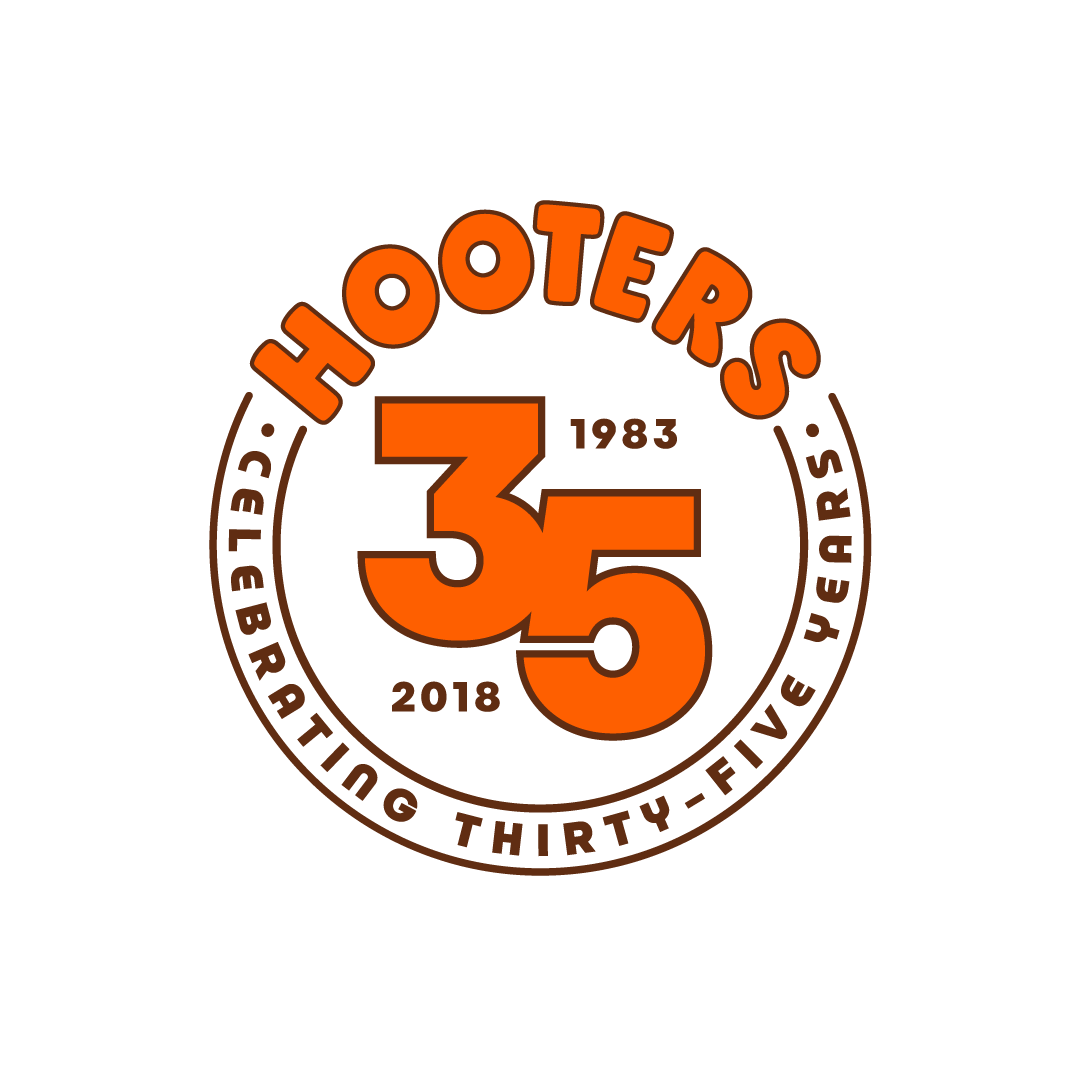 What do you do after you have been World Famous for 35 years? You create a fast version, of yourself that’s what. Meet hoots. We took our most popular menu items, prepared and served in a smaller, quicker style. No Hooters Girl? No problem. Hoots is primarily to-go, with easy online ordering and on-site touchscreen kiosks, in addition to traditional counter ordering.

Headlining the menu are our Nearly World Famous Chicken Wings, available with a wide range of sauces and rubs. The menu also features our delicious Snow Crab Legs and Buffalo Shrimp, our huge Buffalo Chicken Sandwich, and an array of our best starters. Hoots. A bit quirky, a smidge unique, a little different, 100% delicious. 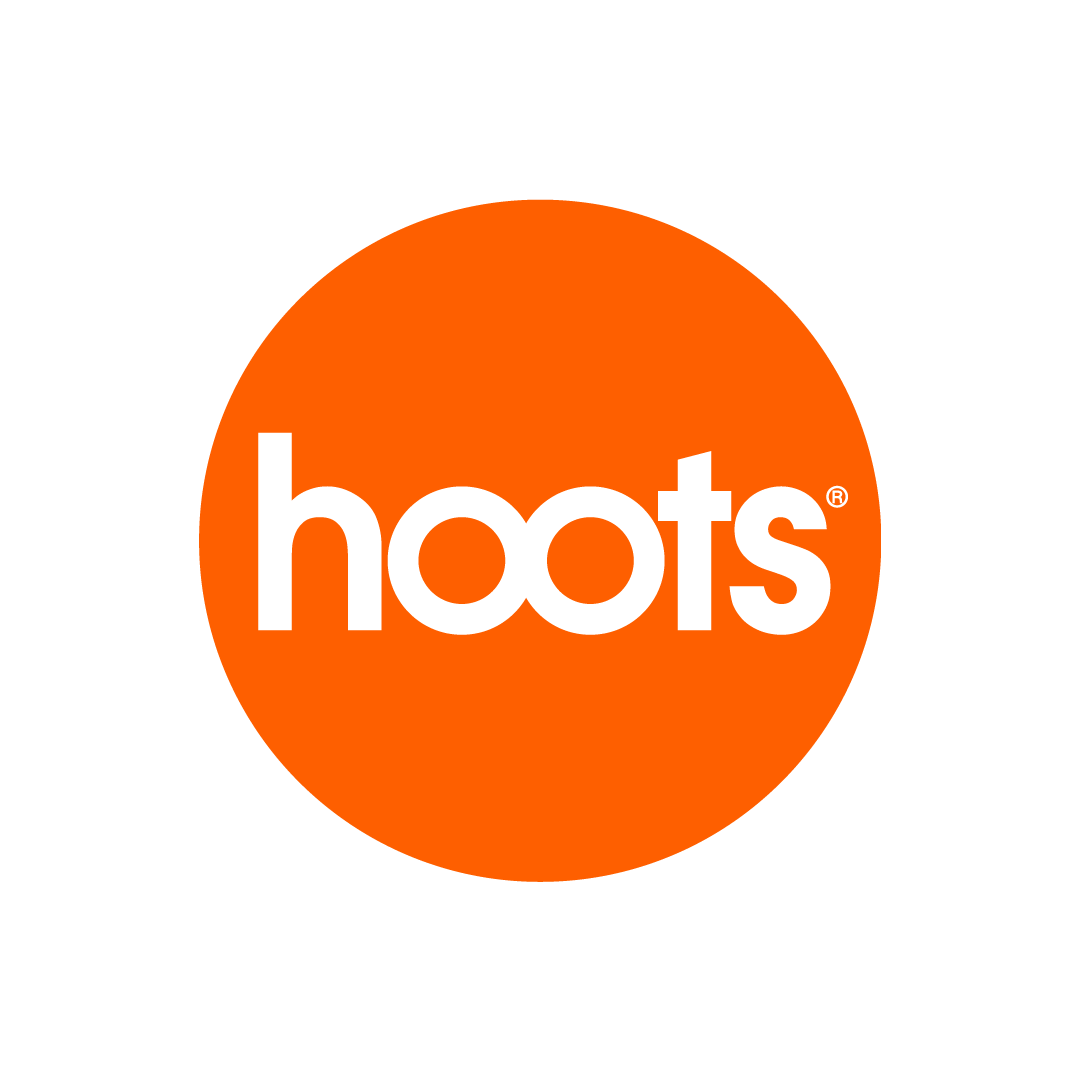 Sign up to receive updates, discounts, and promos delivered directly to your inbox.